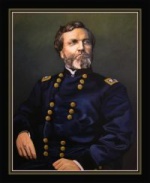 SIR: Two days ago I read General Braxton Bragg's official report of the battles of Stone's River, before Murfreesborough, and, after a proper time for reflection, I think it my duty to send you this communication.

I cannot conceal from myself the fact that so much of the report as refers to my conduct and that of my command (except some general compliments to the courage of a portion of my troops on Wednesday, 31st of December) is in tone and spirit a thorough disparagement of both. This tone runs through all its parts, and lies like a broad foundation underneath the whole. At the same time the narrative of events is made to sustain the general spirit.

While the report of the commanding general fails, as I think, to do justice to the behavior of my division on Friday, the 2nd of January, yet its strictures are chiefly leveled at my own conduct as an officer during all the operations. By direct statement, and by unmistakable, innuendo, it is throughout a reflection upon my capacity and conduct.

Without referring to its contents in detail, I have to say, in respectful terms that neither its material statements nor its equally material innuendoes can be maintained by proof; that its omission of important facts creditable to my division and myself is as remarkable as many of its affirmative statements; in a word, that in spirit and substance it is erroneous and unjust.

I trust that nothing in the foregoing expressions passes the limit of military propriety, and that plainness of statement will be pardoned to one who, even under the weight of superior military censure, feels that both he and his command have deserved well of their country. Having met the commanding general repeatedly on the field, and on three occasions in council, during the progress of the operations, without receiving from him the least indication of dissatisfaction with my conduct, I was not prepared to see a report, bearing a subsequent date, containing representations at variance with these significant facts. Nor was my surprise lessened when I observed that it was written after a correspondence with his corps and division commanders (I being one of the latter), in which he invokes their aid to sustain him, and speaks of them as officers "upon whom I [he] have ever relied as upon a foundation of rock."

The commanding general, having written and forwarded his report before receiving those of his subordinate commanders, could have derived no assistance in its preparation from those usual official aids to the commander-in-chief; and since his position on the field prevented him from seeing many of the movements, especially those of Friday, the 2nd of January, it much concerns all affected by his statements to know something of those other, and to them unknown, sources of information to which he has given the sanction of his influence and rank as the head of the army.

I have felt that it would be improper in a paper of this character to enter upon a detailed vindication; yet in view of the fact that the casualties of war may at any time render an investigation impossible, I hope that it has not been improper for me to place on record this general protest against the injurious statement and inferences of the commanding general, particularly since, not anticipating his censures, I may not have been sufficiently minutes in portions of my own report.

And in regard to the action of Friday, the 2nd of January, upon which the commanding general heaps so much criticism, I have to say, with the utmost confidence, that the failure of my troops to hold the position which they carried on that occasion was due to no fault of theirs or of mine, but to the fact that we were commanded to do an impossible thing. My force was about 4,500 men. Of these, 1,700 heroic spirits stretched upon that bloody field, in an unequal struggle against three divisions, a brigade, and an overwhelming concentration of artillery, attested our efforts to obey the order.

I have the honor to request that a court of inquiry be appointed, to assemble at the earliest time consistent with the interests of the service, and clothed with the amplest powers of investigation. Of course, I do not desire the interests of the service to be prejudiced in the least degree by any matter of secondary importance; accordingly, while an early investigation would be grateful to my feelings, I can cheerfully await the time deemed best by the proper authority.

With great respect, your obedient servant,